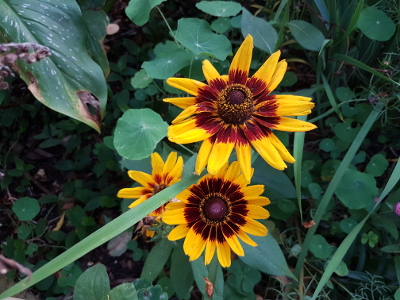 This plant was bred from the native Rudbeckia hirta species and R. ‘Prairie Sun.

Denver Daisy produces enormous 16 to 20 cm blooms with outstretched petals of purest yellow. It is disease resistant and hardy, and is a great garden plant . Best treated as an annual or a shortlived perennial.

Gloriosa Daisy hybrids are sometimes treated as annuals, as they are short lived perennials. This is a mid-sized plant which has large yellow daisy flowers, where the black cone is encircled with a mahogany-red eye. It flowers for many months and the plant is bushy  and compact. It make a very good cut flower and the seed heads can also be used. If you remove spent blooms the flowering time will be prolonged. It looks great in containers.

This plant prefers a moist well-drained soil in full sun. Do not allow soil to dry out. Mulch if soil is prone to drying out.The plant is reasonably drought tolerant once it is established. It was bred by Ernst Benary Seeds to commemorate the 150th anniversary of Denver.

Sow in trays or pots indoors in late winter and spring, early summer and autumn and outdoors direct in spring. Sow seed onto moist well-drained seed compost. Just cover with a fine layer of vermiculite. Propagate 18-20°C. Keep soil moist but not wet. Germination takes 10-15 days. Transplant seedlings when large enough to handle to 8cm pots. Grow on in cooler conditions. Acclimatise and plant out after danger of frost has passed with 45cm spacing. Can be sown directly from late October. Sow thinly 3mm deep into well prepared soil which has been raked to a fine tilth. Water regularly. When large enough to handle thin to 45cm spacing.